The Portland, Maine food scene has been booming in recent years, so much so that people are coming from near and far to enjoy the influx of standout restaurants, and to partake in the growing industry. One local chef, however, says that unlike the recent wave of culinary professionals moving to the area, he’s known all along that Maine is great. Meet Matt Ginn, the Head Chef of Evo Kitchen + Bar.

One thing in particular that Matt feels makes Evo different than the other restaurants in town is that they truly tiptoe the line between fine dining and casual. A guest can come in and have a falafel sandwich with a beer and feel satisfied, or have an eight-course tasting menu with wine pairings. Regardless of what they choose to eat, patrons get to witness up close and personal their food as it’s being prepared, as Evo has an open kitchen concept surrounded by counter seating. 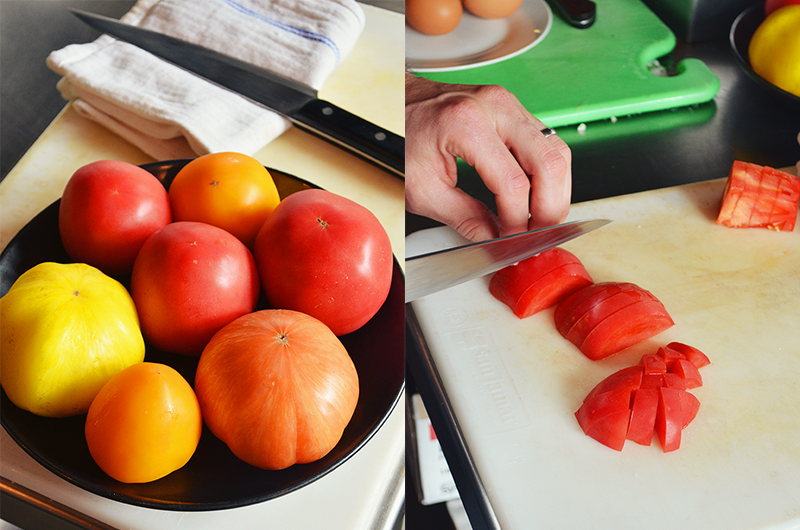 We recently had the opportunity to step into Evo’s stunning kitchen to see firsthand how Matt uses our Staub 1 quart Gratin to make Shakshuka, their newest fall menu item. This popular North African dish consists of poached eggs baked in a tomato red pepper sauce spiced with cumin, paprika and cayenne. Our Staub 1 qt. Gratin is the ideal cookware piece to prepare this dish since it goes easily from stovetop to oven to table, which is ideal for this recipe as the dish is finished in the oven.

The first step for this recipe is to create the sauce, which is made fairly quickly on top of the stove. The enamel coated cast iron of the Gratin distributes and maintains heat evenly and efficiently, making it an ideal tool for this first step. It’s important to note that no seasoning is required for this naturally non-stick enamel coated cast iron and the interior matte black finish contains traces of quartz making it resistant to chipping, and cracking which delivers better browning.

While slicing the countless tomatoes needed for the sauce, Matt explained that Evo uses only local produce in their dishes. They have close ties with many Maine farms and are all about featuring the season’s best produce. For instance, you’ll be sure to see squash, peppers, turnips, Brussels sprouts, tomatoes, apples, pears, among many others this season on their menu. The menu changes all the time - they will have six new menus before December 21st! 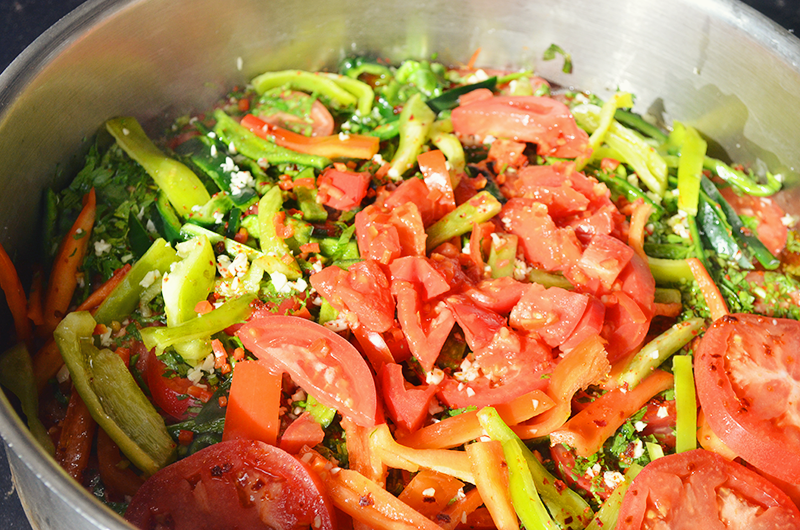 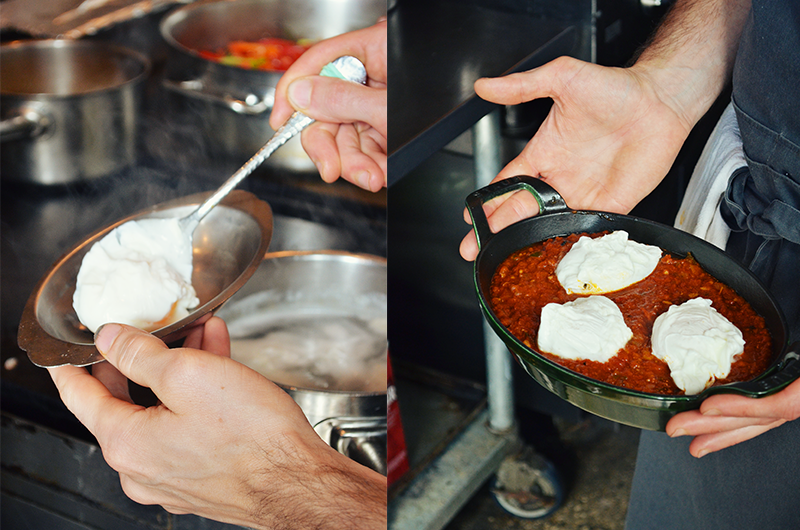 The Shakshuka sauce was cooked down until thick and rich, then it was blended and poured into the Staub Gratin pan. Next we watched as Matt poached each egg and nestled them neatly into the sauce. He then placed the Staub gratin into the oven to bake for about 10 minutes.

Once removed from the oven, Matt completed the dish by artfully topping it with balls of fried goat cheese, jalapeno pepper slices, fresh cilantro, and thinly chopped chives. Served with a side of homemade pita, Shakshuka is sure to delight your taste buds and warm you from the inside out on even the coldest of fall days. 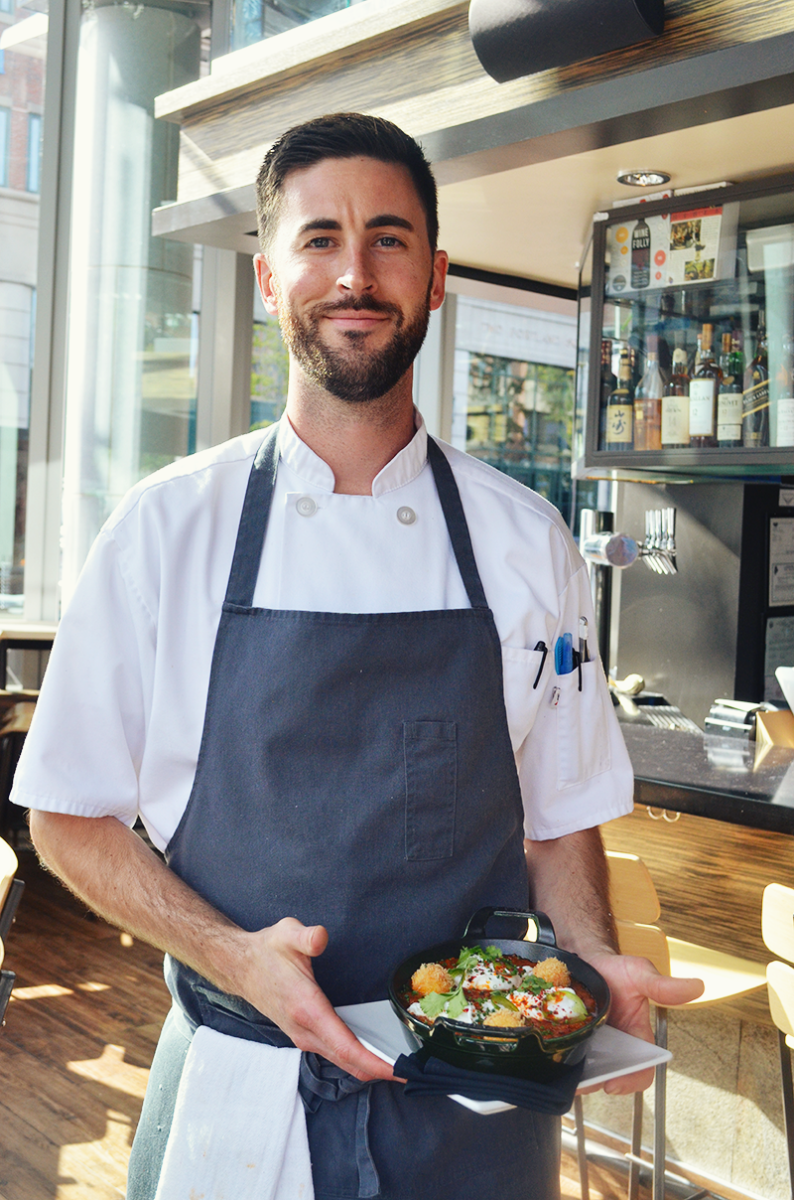 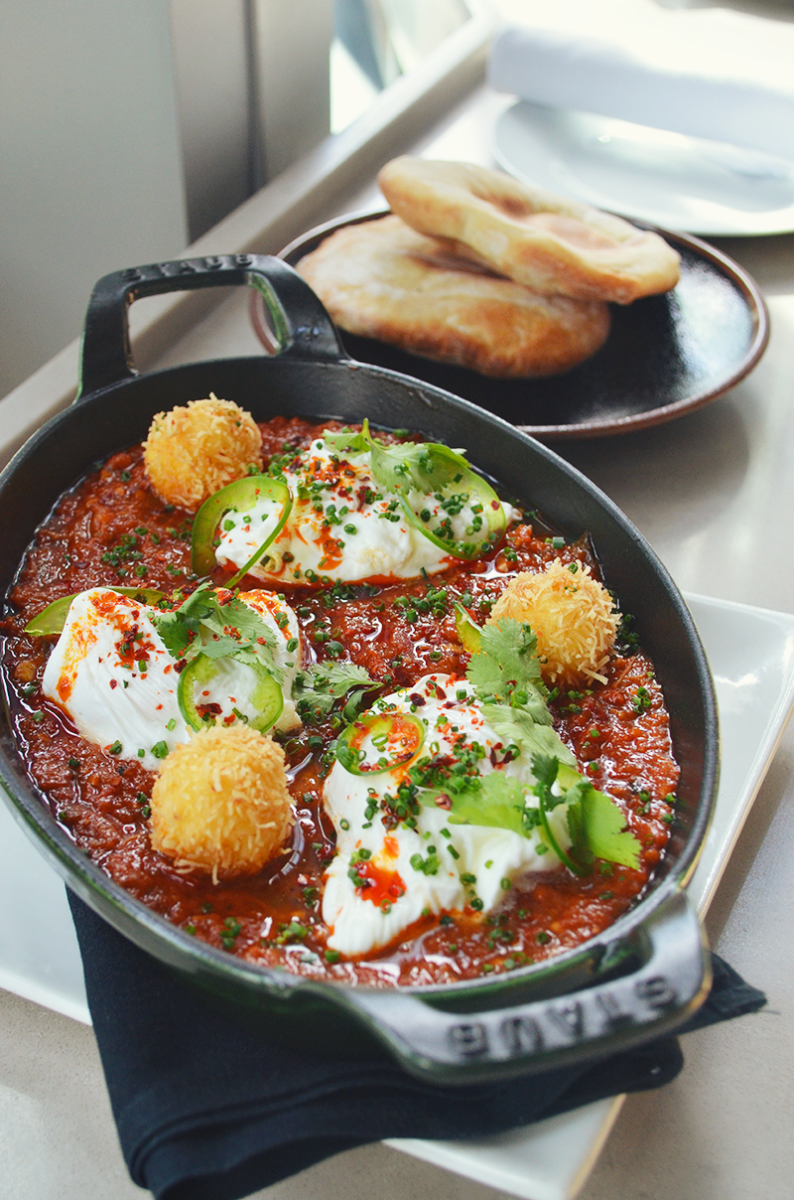 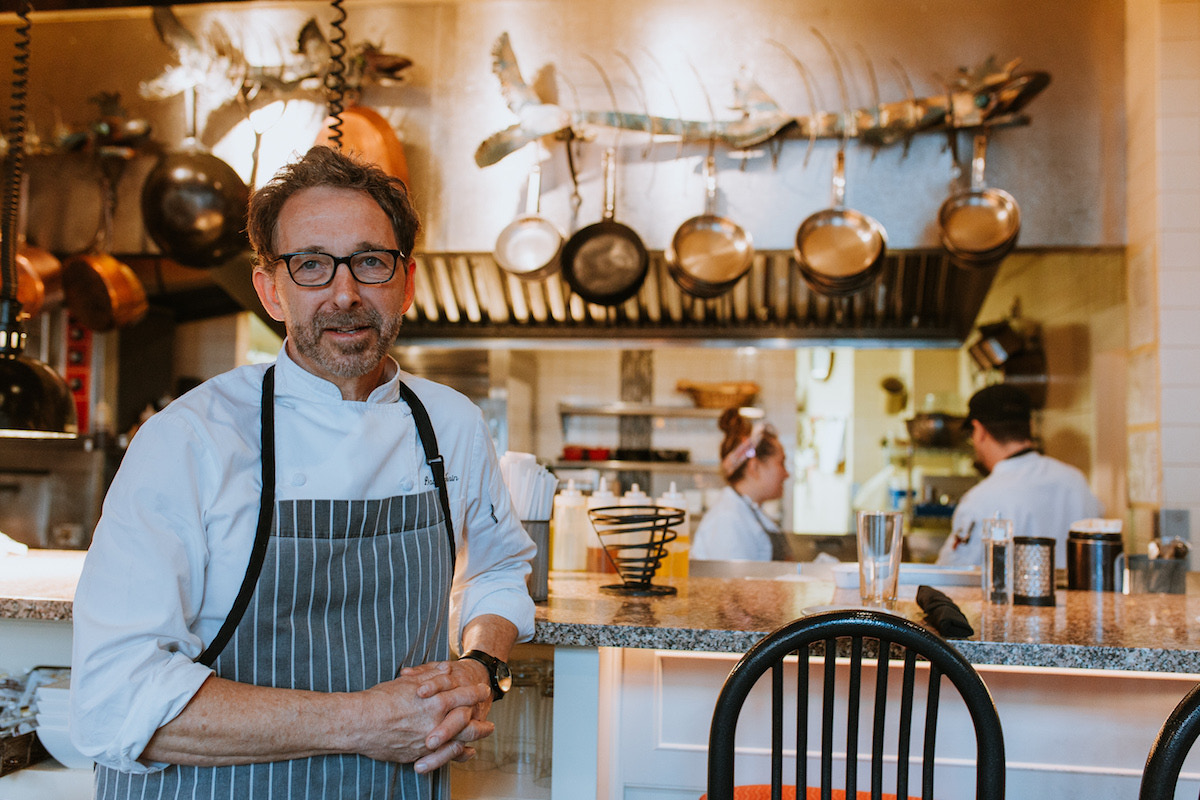 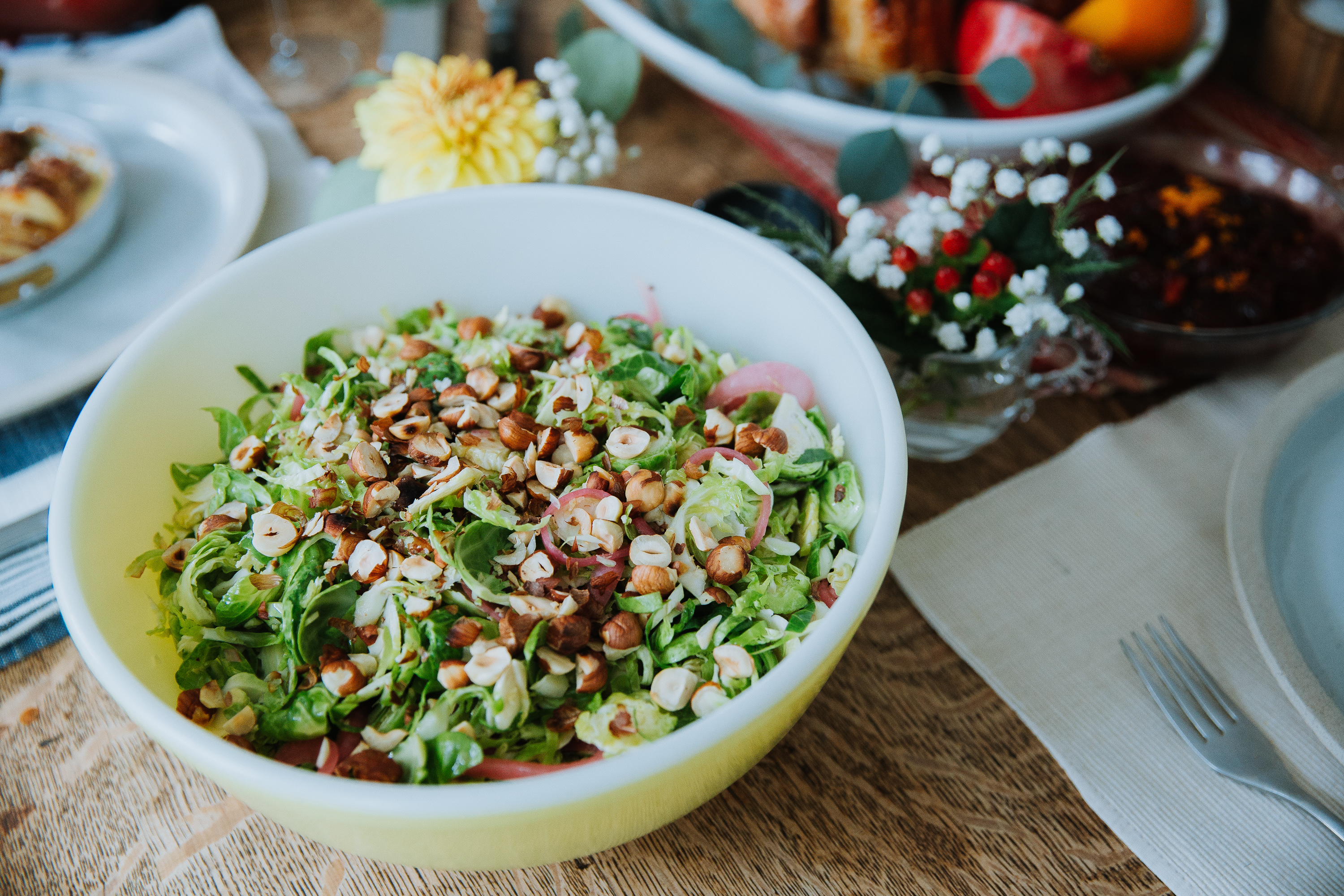 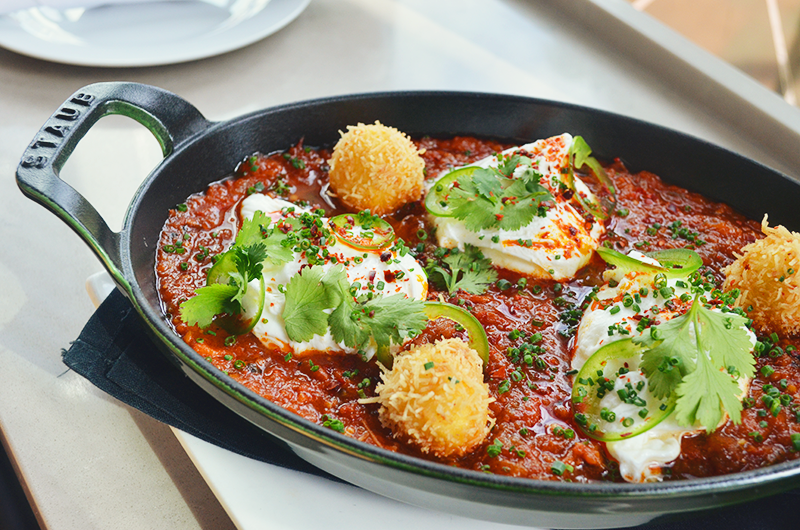